Leaky gut is a condition of the hindgut (cecum and large colon) which can and probably has affected most domestic horses at some point in their lives. Leaky gut, also known as cecal/hindgut acidosis or intestinal permeability, is a significant problem for horses because it is responsible for so many different symptoms and health problems. But it is not well recognized, not diagnosed often enough, and not effectively treated when it is. So, it continues to be a major contributor to a variety of health conditions without us realizing it.

The hindgut is designed to ferment fibre since fibre is the main source of energy for horses. But fibre cannot be digested enzymatically in the foregut (stomach and small intestine) and must be fermented in the hindgut. Fermentation is described as the chemical process which breaks down food with bacteria, yeast, or other microorganisms that are all a normal part of the hindgut microbiome. However, common feed imbalances such as excess sugars, fats, and proteins (usually alfalfa) create too much fermentation which produces toxic by-products. The process of microbial fermentation normally produces fizz, methane gas, ammonia, and heat. However, if the fermentation is excessive, it will produce too much heat and gas as well as elevated levels of lactic acid which lowers the pH (increased acidity). Rapid fermentation and low pH cause the proliferation of bacteria such as saccharolytic and amylolytic bacteria which produce more lactic acid. Lactic acids can cause an increase in yeast and other pathogenic bacteria such as E. coli, Salmonella, and Streptococcus, all of which prefer an abnormally acidic environment. But these acids also kill off friendly bacteria (probiotics). And when large amounts of bacteria die off – whether they are friendly or unfriendly - they release toxic chemicals. All of these toxic substances combined will eventually damage the intestinal membranes. Once the membranes are damaged, they become overly permeable allowing acids, bacteria, yeast, parasites, waste products, and mal-digested food proteins to leak through the intestinal walls and migrate into the general circulation. This then results in a process known as autointoxication which can cause a variety of health problems and symptoms. 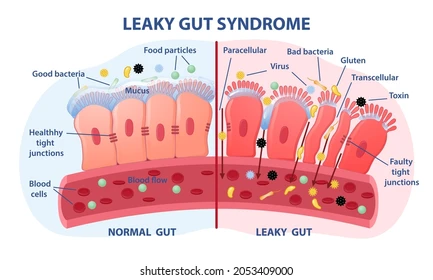 The integrity of the healthy membranes is normally maintained by tight junctions between the tissues. But injuries to the membrane walls results in the loss of barrier integrity and an increased absorption of endotoxins.

Autointoxication, as discussed, is a result then of leaked endotoxins, chemicals, mal-digested feed products, and bacterial by-products (some of which are vasoconstrictors and enzyme activators) into the general circulation. This results in inflammation throughout the entire body. Ears, nose, throat, lungs, muscles, joints, skin, hooves, immune system, and the nervous system can all be affected. So, it is not unusual for a leaky gut to contribute to respiratory problems, skin conditions, immune issues including auto-immune, allergies, and increased levels of anxiety. And, because the kidneys and liver are major elimination organs, they can become over-burdened as well causing further issues with accumulated toxicity. In advanced cases of leaky gut, the body tissues will cease to absorb water and electrolytes from the colon, and so the water along with important minerals such as potassium, sodium, calcium, and magnesium, will leak back into the hindgut causing diarrhea, nutrient deficiencies and/or weight loss.

As acid levels increase it lowers the pH levels throughout the body and then the blood and tissues become overly acidic as well which affects various body systems. High acidity almost always impacts the immune system resulting in an increase of allergies, infections, frequent illness, or skin conditions. High levels of lactic acid or uric acid in the bloodstream frequently cause joint inflammation and also affects how efficiently horses are able to recover from exercise. Acid often builds up in the muscles for example which results in stiffness, soreness, and sometimes tying up (exertional rhabdomyolysis). Unfortunately, many sore horses end up taking glucosamine products because their health care providers believe that the horses have structural joint problems and/or arthritis. But their stiff and inflamed joints could very well be a leaky gut problem. In addition, glucosamine is a type of sugar and is therefore contraindicated in leaky gut, as well as in horses with sugar sensitivities or Equine Metabolic Syndrome.

Any damage to the hindgut walls can potentially cause colonic ulcers as the membranes are constantly irritated and inflamed. Symptoms vary, but hindgut ulcers may cause weight loss, irritability, lack of cooperation, inability to focus, fatigue, colic, bloating, and poor appetite. And the increase in toxic substances along with the depletion of probiotic levels compromises the intestinal microbiome which significantly affects the intestinal immune system. But leaky gut can also be a direct cause of stomach ulcers! Toxicity, feed intolerances or allergies, as well as stress trigger the release of histamines throughout the intestinal tract which is an allergic-immune reaction. Histamines cause rapid inflammation as well as increased production of acids including hydrochloric acid (HCl) in the stomach. The increase of HCl production results in damage and possible ulceration to the stomach lining.

But perhaps one of the biggest concerns, and one that is often overlooked, is that leaky gut is a major contributor to laminitis. The circulating bacteria, yeast, acids, and toxins find their way to the blood rich hooves where they cause on-going inflammation of the sensitive tissues of the lamina. Histamines too are a direct problem; they are powerful inflammatory chemicals which can cause sudden inflammation of the hindgut wall with dilation of blood vessels. This causes a rush of blood to the feet, followed by stagnation which depletes the oxygen supply, which then starts the breakdown of the laminae. In this process, leaky gut causes or perpetuates soreness and lameness of all kinds. Especially if the trim isn’t balanced. So many times, I hear concerned horse owners exclaim that they have done everything right and their horse is still sore. The horses are on a low-sugar and balanced diet, the trim is suitable, and yet the horses remain unsound. The missing link in these cases is often a toxic and leaky hindgut where the diet change on its own was not enough.

We have learned that too much fermentation equals toxicity, and that excess fermentation is a result of over-feeding grass, fructans, high sugar hay, oats, corn, 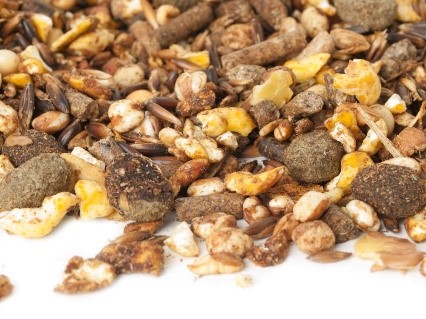 barley, long term commercial feeds, and too much protein, usually alfalfa. All of these grains and proteins need to be digested with specific enzymes and then absorbed in the foregut. However, when these feeds are not well digested, the mal-digested feed material passes into the hindgut instead. The hindgut’s response to this is to try and ferment this food mass because it cannot digest it. The hindgut is designed to ferment fibre, not the partly digested by-products of sugar, grain, or high protein. Protein can also putrefy (i.e., rot) which can result in toxic chemicals including ammonia.

Adding too much oil to the diet is also a culprit since oil slows down the intestinal transit time, upsets the microbiome, and impacts nutrient absorption. Many of the oils fed to 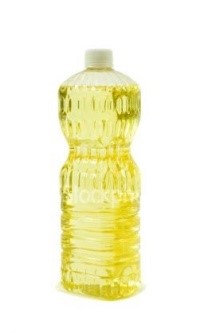 horses are cheap oils that are already denatured or rancid at the time of purchase.

these oils are hard for the horses to metabolize and cause free radical damage to the tissues. They also impact the intestinal immune system. Commercial feeds can contain high quantities of mass-produced oils and are often sourced from GMO crops. By-products and artificial ingredients are also toxic to the gut.

Be Aware of Lectins

Another consequence of feeding grains is a type of protein that is found in oats, barley, rye, soy, and wheat middlings. These proteins are known as lectins and they are nasty little food proteins that have the ability to bind to membranes found in the arteries, organs, glands, tissues, and intestinal walls. Once they do so they release histamines, 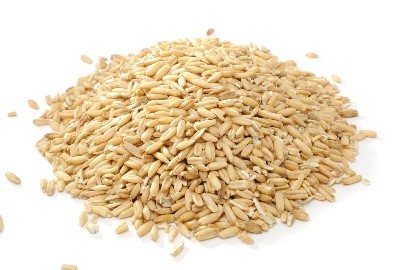 produce bacteria, damage the cells, disrupt membrane function, and initiate a cascade of immune and auto-immune reactions which eventually kill the cell. When this occurs in the colon the histamine reaction triggered by the lectins produce a specific bacteria (Allisonella histaminiformans) which thrives in an acidic environment. This bacterium has been identified in the cecum of horses eating grain or grass but not in horses on a hay diet.

Therefore, lectins are a primary contributor to leaky gut followed by autointoxication when they migrate into the general circulation. Here they can bind to any and all tissues. Inflammation and cell damage caused by lectins, especially in lectin-sensitive horses, leads to numerous food reactions, hormone imbalances, auto-immune disorders, and a variety of chronic problems including laminitis!

Horses are vegetarians but it appears that they have not evolved to eat large amounts of grain after harvesting.

Almost all of the common medications given to horses have an effect on the hindgut microbiome. Chemical dewormers, steroids, non-steroidal anti-inflammatories, and vaccines are all capable of tissue damage, especially with over-use. And antibiotics, due to their widespread use, upset the gut by depleting levels of friendly bacteria and increasing yeast cells. Almost all horses with systemic yeast issues have previously been on antibiotics. 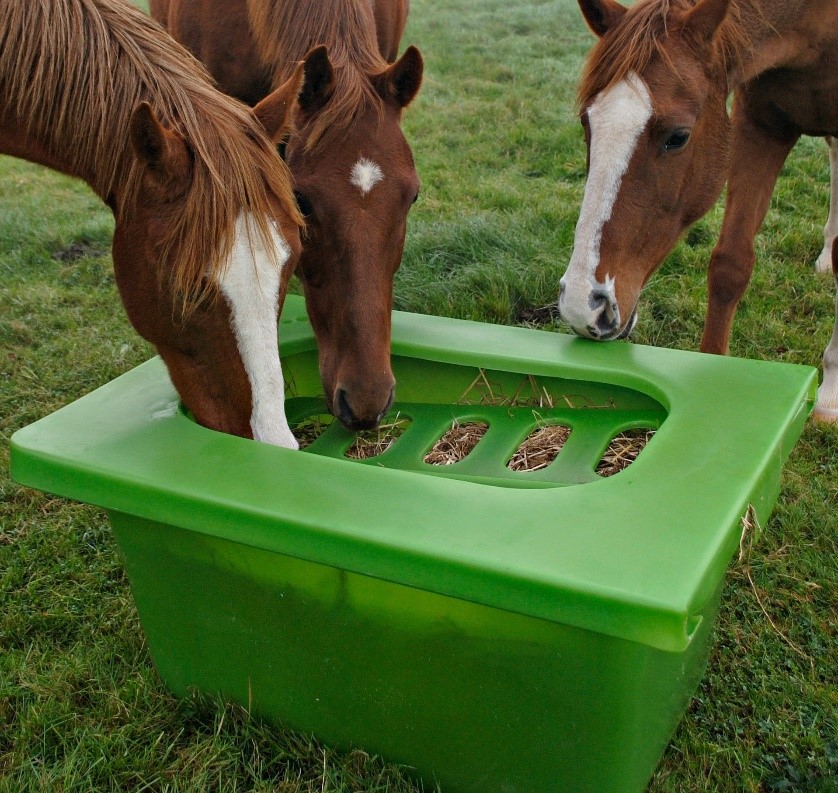 Remedies to Detoxify, Cleanse, and Restore a Horse’s Gut Health 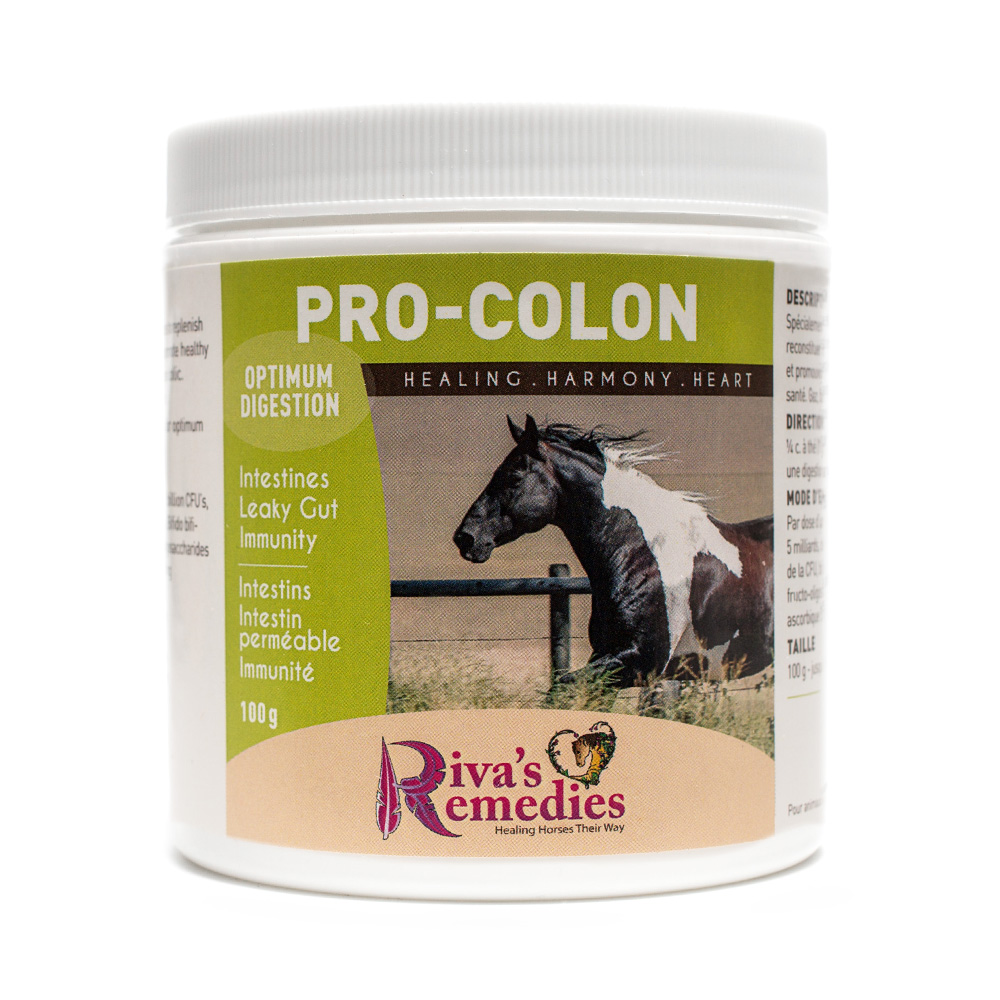 Pro-Colon –1/4 tsp daily Pre and probiotics to support the intestinal immune system, balance the hindgut ecosystem, and discourage the overgrowth of bacteria and yeast. Riva’s Pro-Colon has no fillers or binders. It requires refrigeration to ensure maximum potency. 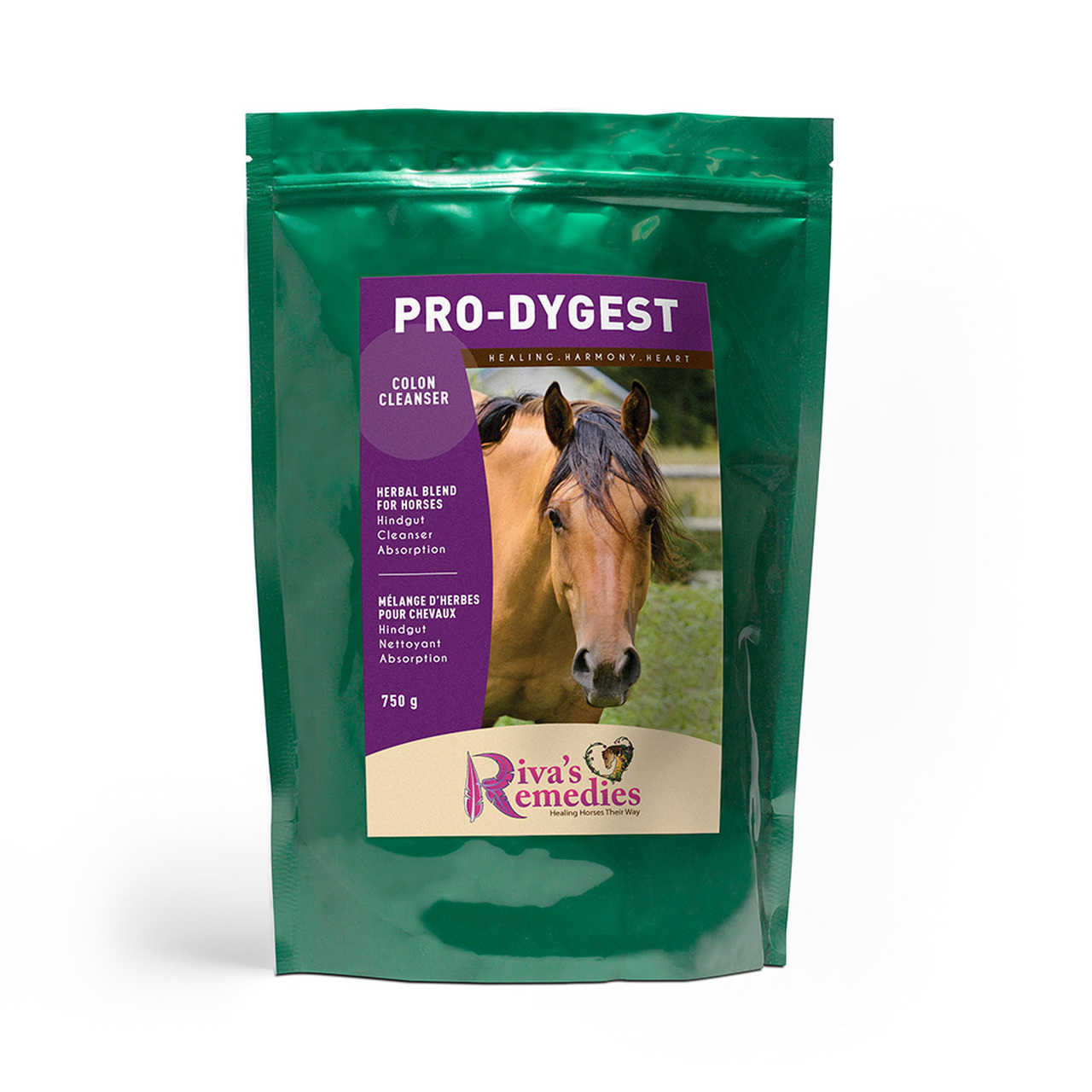 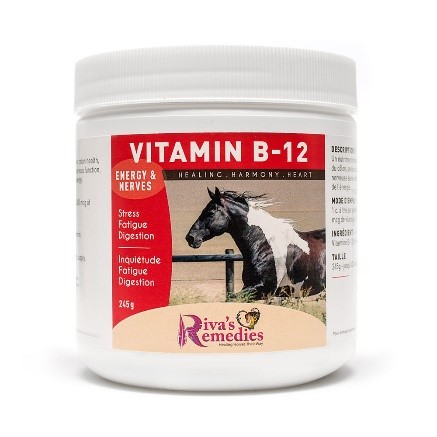 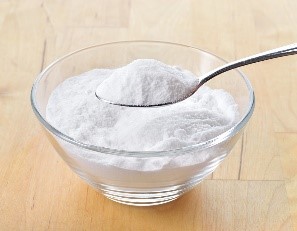 So much more information has become available in recent years on just how important gut health and the role of diet really are in almost all diseases and health conditions. By understanding how to improve the health of the equine hindgut with an optimum feed program along with the right supplements we stand to help a lot of horses with their well-being. These are horses that otherwise may have many challenges finding the right treatment program that they need for a successful recovery. 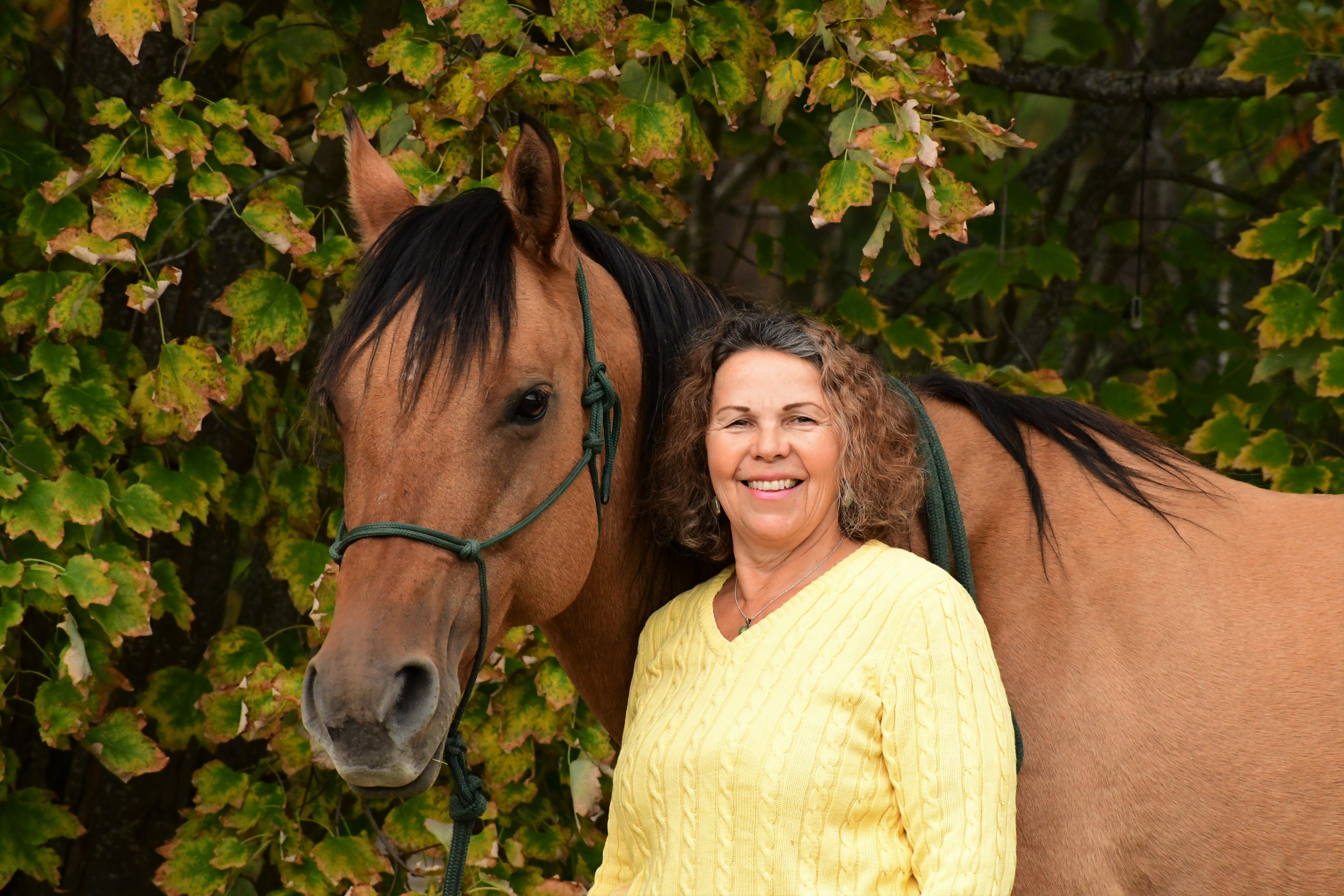 Marijke is a life-long horse lover, the author of the best-selling Healing Horses Their Way, and the founder, formulator, and CEO of Riva’s Remedies. She is a gifted healer who helps horses, and their people, from around the world live happier, healthier lives.